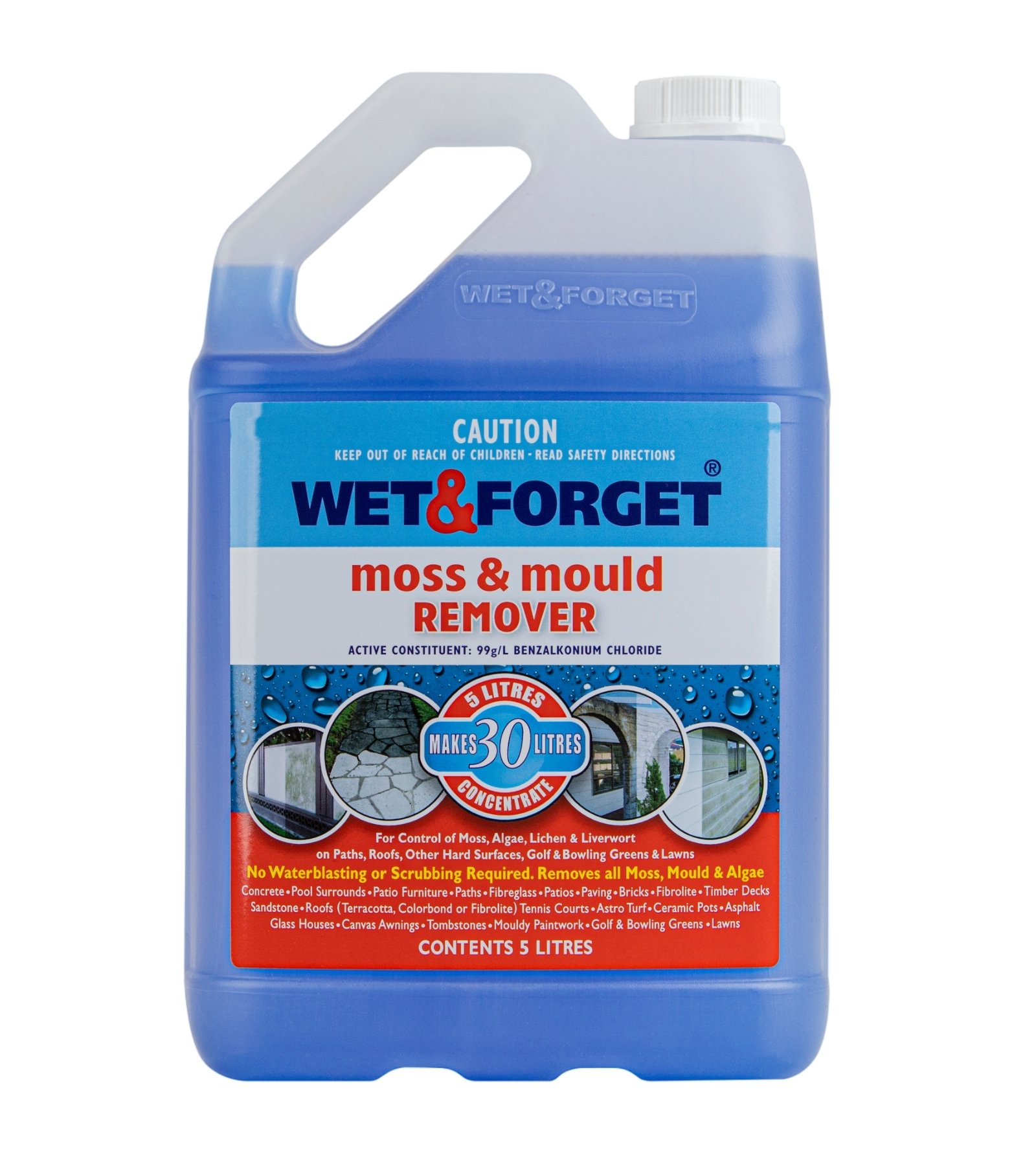 Got moss? Got mould? Got something growing that’s making things look old?

If the answer is yes, then what’s needed is a good mould remover. There are a lot of mould removal solutions available on the market, but only a fraction of them will get the job done properly and deliver long-lasting results.

So, which Mould Remover will work?

There’s a number of things to look out for when shopping for an effective mould remover.

It can be easy to turn to products that contain bleach when tackling mould and other growth, but the trouble with bleach is that its results are more aesthetic than functional. Bleach-based products can look like they work fast and well because they remove the pigment (colour) from the mould, but in actual fact the mould is still there! Bleach can be effective at killing mould or bacteria on non-porous surfaces like ceramic or stainless steel but doesn’t help much on porous surfaces like timber or concrete. The other reason that it is best to choose a non-bleach mould removal product is because bleach can damage to surface it is applied to. Applying bleach to a timber deck, for example, will lighten it considerably and sometimes unevenly. A good mould remover shouldn’t damage the surface that the mould is on…it should only damage the mould!

Another thing to look for in a mould remover is whether or not it is non-systemic. When a product is non-systemic, it means that it cannot be taken up by a plant’s root system, i.e. the plants can’t drink it. This means that if there is a chance that product run-off may enter your garden soil you won’t have to worry about it killing your plants.

A good mould remover should also have fungicides in its recipe. Fungicides are the ingredients that actually kill-off the problematic mould spores, so while other mould removers may be able to provide a good visual result, it won’t be as effective or long lasting as using a mould remover that uses fungicides. A mould remover with fungicides can also help with not just removal but also with prevention, making it harder for these biological growths to come back at full force.

That’s a lot to take in. So what now?

There may be a lot of things to look for in a good mould remover, but it is worthwhile finding the right one so that the best results can be achieved. An example of a great mould remover that meets all the above criteria is Wet & Forget Exterior Moss and Mould Remover. Wet & Forget has been around in Australia for over 15 years and has been tried, tested and trusted by many Australians hoping to tackle their biological growth problems.

Wet & Forget is designed to target moss, mould, lichen, algae and other growths that can be ugly, slippery, or harmful. Wet & Forget is bleach-free, non-caustic, non-acidic and has a pH of 8 (water has a pH of 7!) which means that it is very gentle (as far as chemical cleaners go) and can be used safely to treat growth on almost any surface without damaging the surface itself. Wet & Forget is biodegradable, non-systemic, full of effective fungicides and easy to use. The Wet & Forget mould remover has also been made even easier to use with the introduction of Rapid Application, the hose-end version of their original mould remover. Just attach to a standard garden hose and go.

One of the best things about Wet & Forget is that once it is applied to the surface, the work is done. Wet & Forget doesn’t need to be washed off – the product soaks into the surface and continues to work when it is reactivated by the weather. Wet & Forget is a great solution to biological growth problems, and even helps to stop them coming back so quickly.

Visit the website to learn more about these great mould removal solutions.

Using Paper in Products That Save Money and Save the World

Features Of A Trusted and Reliable Energy Solutions Company In Australia

A Complete Introduction to Roofing

Reducing stress during a move